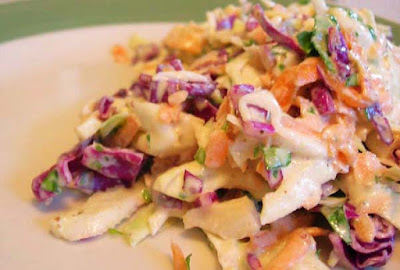 Prep time: 20 min Chill time: 4 hours Total time: 4 hours 20 min This simple nouveau African coleslaw side salad is perfect for picnics or backyard braai barbecues. The word braai is a South African Afrikaans language word pronounced BRY rhyming with why. Braai is popular in Southern Africa especially with people who live in South Africa, Namibia, Zimbabwe and Zambia. Braai may have originated with the South African Afrikaner people, but has since been adopted by South Africans of many ethnic backgrounds. An important distinction between a braai and a barbecue is that it is uncommon for a braai to use propane; braai is an open flame cooking method. Braai has been around for centuries and has truly stood the test of time. One simple spice recipe is a basic African coleslaw side salad, enjoy this recipe next time you grill meat on an open fire. African Coleslaw Ingredients and Directions Ingredients 3 cups shredded green cabbage 1 cup shredded red cabbage 1 cup shredded carrots
Complete recipe » 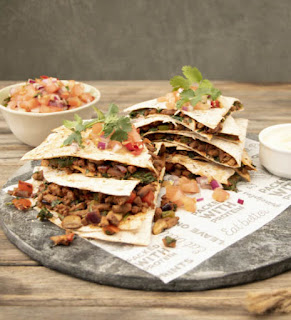 Looking like a tortilla, Chapati za Maji is a crispy thin bread from Kenya cooked with creamy buttermilk. Chapati bread is usually eaten with breakfast, lunch and dinner and as a snack with soups, stews and curries.  Pro-tip: make Chapati za Maji bread as you would thin tortilla's, pancakes or crepes. Kenyan Chapati bread looks like a Spanish tortilla eaten in a similar way. Cook buttermilk flat crispy thin bread from Kenya and stuff with meat, cheeses and veggies. Ingredients 2 cups wheat flour 2 large eggs 1 1/2 cups buttermilk 1 tablespoon white sugar ¾ cup vegetable oil or spray oil Directions Heat over medium-high heat grease 1 tablespoon of oil or spray fry pan with oil. Stir all ingredients until blended. Place 2 tablespoons of batter onto hot fry pan. Cook until edges are crispy, turn onto the other side cook until golden brown and cooked on the inside. Remove from fry pan and place on paper towels or kitchen towel to drain. Repeat until batt
Complete recipe » 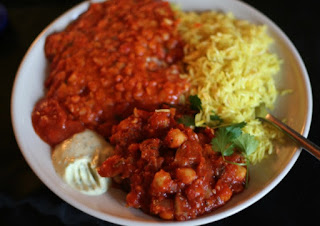 Medium-hot madras made with fresh chickpea is spicy, but do not worry because this version is not very spicy hot, just kinda medium spicy. Making South African Indian food from scratch means, you control the heat, that’s the nice thing about cooking for yourself. Add mild tasting kashmiri chili powder or use the hotter red Indian chili powders. Kashmiri chili powder or degi mirch is bright red, but mild in heat and used in and Indian cuisine, named after the region of Kashmir. Chennai is the capital of the Indian state of Tamil Nadu and on July 17, 1996, the city known as Madras was officially renamed Chennai however; the name of the world famous food dish did not change. Madras curry was created in southern India and gets its name from the city formally known as Madras.  The Indian population in South Africa lives mostly in Durban and this is the reason Indian food is very popular in South Africa. Outside of India, South Africa has the largest Indian population in the world. The f
Complete recipe » 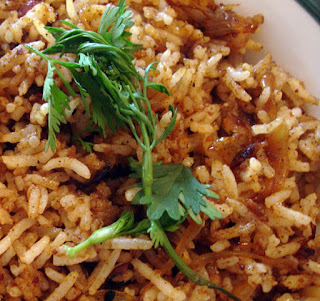 Sweet Potato Leaves with Onion Fried Rice is an easy Swahili food recipe from Kenya. Swahili rice dish called Wali wa Yasmin in the Kiswahili language is an Onion Fried Rice food recipe from Kenya. This rice recipe is a typical dish in many Swahili communities along the Swahili coast along the coastal Kenyan towns. Onion Fried Rice is a dish made of white, mixture of onions, and spices mixed together. Swahili Onion Fried Rice. Ingredients 2 cups white rice 2 large onions, chopped 1/3 cup coconut oil 1 teaspoon salt 4 cups water Directions In a large pot over medium high heat add oil, then add onions and fry until golden brown. Add water, rice, and salt then cover and cook for 10 – 15 minutes. Serve with an easy vegetable dish of Kitojo Sweet Potato Leaves.  Sweet potato leaves are widely popular throughout Africa in cooking recipes. Sweet potato leaves are edible and delicious with a soft texture that tastes like kale or spinach. The best way to cook
Complete recipe » 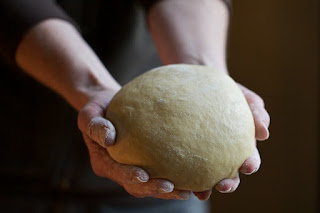 Easy African recipes by The African Gourmet. How to make Ghana Eba, Meko and Canned Sardine Tomato Sauce African recipe from scratch in your American kitchen.    Eba is made with cassava flour known as Garri in Ghana. Traditionally Eba is used as a side dish to soups and stews in Ghana and Nigeria. Cassava is known by various names, manioc, yucca, yuca, mandioca, and tapioca.  Nearly every person in Africa eats around 176 pounds or 80 kilograms of cassava per year especially the African countries of Ghana and Nigeria. Eba is eaten by out pulling small pieces and squeezing it lightly to form a ball with the dough to scoop sauce. Use Eba in place of your fork and spoon. Easy African food recipe made from scratch to cook in your American kitchen. Eba Made Easy Ingredients 1/2 cups garri 1 teaspoon sea salt 2 cups water Directions Add boiling water in a large bowl, add salt mix ingredients together well. Too much water and your Eba will be thin, too little wat
Complete recipe »
More posts